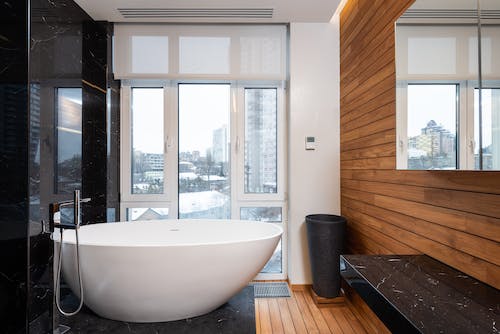 If we have enough space, it is worth thinking about typical bathroom furniture. Its appearance is suitable for both classic and modern interiors. Cabinets are finished with natural wood in light or dark colors, but other variations can be selected. Consider the existing furniture when you are doing bathroom remodeling.

When choosing bathroom furniture, several very important factors should be taken into account that will allow you to create a room that meets your needs and expectations: both functional and visual. Fashion for projects ordered for individual clients in professional design bureaus has a very good effect. New bathrooms reflect your character and passion.

Hanging cabinets are also a good solution: from the simplest “pharmacy” type to designs with semi-circular transparent or frosted doors. You can hang them in almost every bathroom, and the absence of traditional feet makes it easier to keep your floor clean. Pull-out cabinets are especially useful for storing towels or cleaning supplies. The sloped structure can accommodate laundry waiting to be washed if the bathroom also has a washing machine. Instead of traditional cabinets, you can also use wicker baskets, wooden crates, or even color-matched cardboard boxes.

A bathroom that provides a sense of comfort, as well as an aesthetic space that is responsible for relaxation, requires the creation of an appropriate atmosphere and arrangement of functional areas, taking into account the type of fixtures, lighting, and other equipment (such as furniture) suitable for the needs of the household.

To give the space a more modern touch, use a large mirror or cabinets with reflective fronts. Use glass elements that add a lot of light. When choosing a shower stall, choose a minimalist glass door. For a bathroom to look beautiful, it also needs to be modern and adapted to the character of the space. 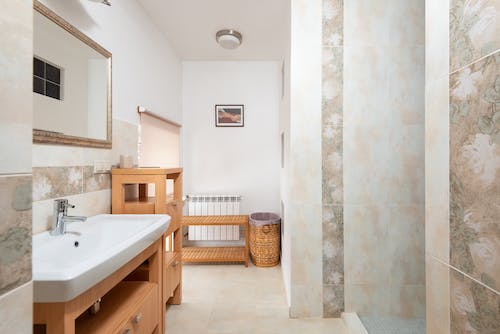 Not all bathroom accessories need to be stored in closed cabinets. Some everyday cosmetics should be easily accessible. The shelf can be mounted in different places:

An interesting idea is the open washbasin shelf, which is easy to keep clean. The shelf can also be a sink countertop, where there is enough space for all the necessary accessories. However, it should be remembered that the top must be made of waterproof material and well sealed at the junction with the washbasin. The same rules apply to the shelves next to the bathtub or shower. If you have a bathroom with a low wall that divides the toilet, you can also use it as a shelf.

Regardless of what type of storage furniture you choose, remember that everything in the bathroom should have its place. There must be order in a room that is associated with cleanliness.

Design Of A Spa

Indeed, hot tubs are increasingly popular because of their recognized therapeutic benefits. This is why many development projects now include a spa in an area specially designed for relaxation. Being able to enjoy a jacuzzi in its outdoor space is the ideal solution in order to combine happiness, plenitude, and relaxation. To make this area a real little corner of paradise where owners can enjoy it in winter as in summer, it is important to properly assess its location, and above all, choose the type of layout that will harmonize with your style, and that will last in time. A trend that we love at landscaping Austin tx! In addition to being aesthetically beautiful, the built-in spa completely blends into the decor. Whether its outline is coordinated with the chosen uni-stone or whether it is embedded in the extension of a wooden terrace, this landscaping idea will certainly charm you!

Several options are possible. First, the spa can be fully recessed in the ground, leaving only the thickness of the cover. Or, it could be recessed a few inches in order to better harmonize the decor or to obstruct the view less. This concept allows positioning almost anywhere in the layout provided there is sufficient space to excavate. You must also provide access to manage the spa mechanics.

For several years now, many swimming pool manufacturers have been offering the design of custom spa integrated into the swimming pool. This option brings a chic side to your layout. Although this option is less expensive than purchasing an independent spa, be aware that this type of spa does not generally have the same technical specifications or the same therapeutic capacities as a spa.

Bad weather will not prevent you from enjoying your spa if it is installed on a covered terrace. Pergola, gazebo, or roof extension, there are more and more options to enjoy the outdoor courtyard regardless of the temperature. A covered space facilitates access to the spa at any time of the year. It will protect you from the hot summer sun as well as from the snow in winter because the integration of a spa into its landscaping is an added value for an outdoor courtyard but, above all, a big plus for the well-being of its user.

Do you want a relaxation area where you can enjoy a spa? Contact us now, and we will make your dream come true!

Do I Contract With A Single Construction Company To Make My House Or For Trades?

There are mainly 2 ways to build a home:

Can you save that much by batching?

In most cases, the economic “savings” are much less than what the owners believe.

There are two main things to keep in mind:

Safety and Health at the construction site

Another cost of hiring several companies is the issue of security.

Safety and Health of the different companies

To start, each Construction company must comply with all the applicable regulations in Health and Safety, and in Occudecknal Risk Prevention. Furthermore, it must be complied with both by the company itself (its workers) and by the subcontractors and self-employed workers under its charge.

In other words, this would take care of everything with a single company, including the deficiencies of one of the subcontractors. If you have several companies hired by you, each of them you will have to demand the same as you would demand of only one. Do I contract with a single construction company to make my house or for trades? Who puts the “common things”?

In work, there are many structures that “everyone will use.” In the absence of the Main Builder, all of them should be put (and paid) by the developer/owner.

It is very easy to tell the Builder that you are “inflating” 20% of the budget of a subcontractor. However, when you count the construction fence’s price, the construction shed with its bathroom, the crane, etc. you realize that in that 20%, there is usually no more than 10% profit.

The coordination of the different trades

With a single construction company, there will be one person in charge – be it the Site Manager or, at least, in charge – of carrying out this coordination. If that figure does not exist because you have contracted the work by trades, you will have to be the one in charge of calling each other, organize them on-site when their works overlap or control that the works are finished to notify the next company of let it in.